Growing up, Lawrence could solve a Rubik’s Cube in a heartbeat but when it came to girls he had no clue. A true tale of forgotten words, lost letters and puzzling pursuits. Based upon memories and genuine undelivered love letters locked in a briefcase under his bed, Lawrence weaves a riddle spanning 15 years, from a childhood obsession with puzzles to solving the enigma of first love. 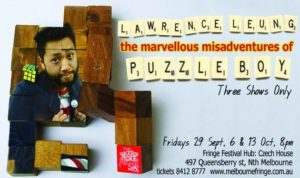 “It is a marvellous show. Beautifully structured. You can’t help but fall in love with him” – InPress Magazine

(Illustration: Robin Tatlow-Lord, as drawn during the show)